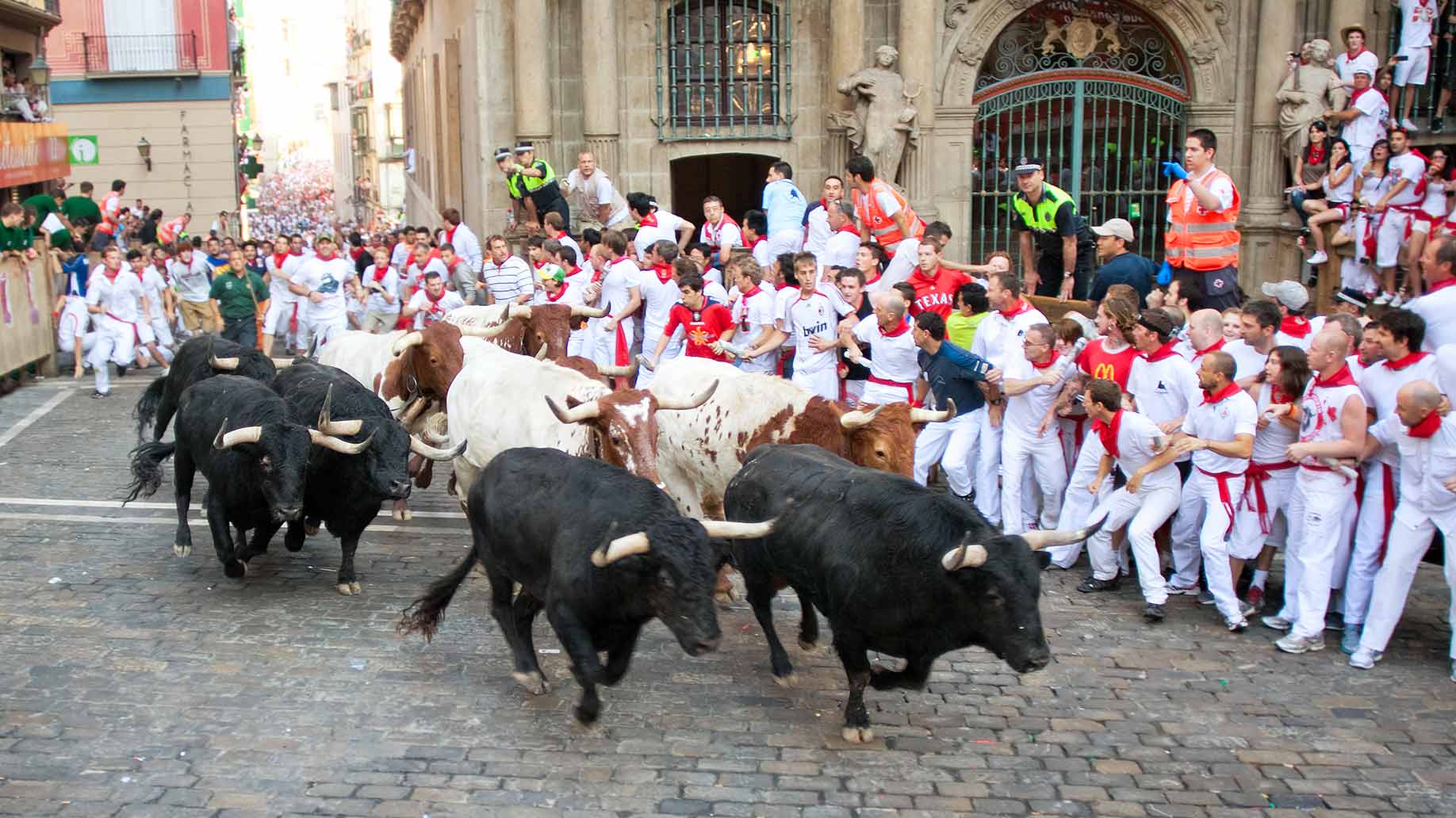 Maybe you’ve read Hemingway’s The Sun Also Rises? Perhaps you’ve seen the beginning of Billy Crystal’s movie- City Slickers? Or maybe you’ve got a death wish and skydiving doesn’t thrill you like it used to? No matter what your reason, there is no doubt that running with the bulls in Pamplona is an adrenaline rush without equal.

It’s unclear exactly how and whenel encierro, the running of the bulls in Pamplona, Spain originated. As a celebration, the festival of San Fermin, the patron saint of Pamplona, is a religious festival, originally celebrated in October, possibly as far back as the 13th century. The bulls, on the other hand, traditionally were moved through the streets from the farms to the bullring, for the weekly bullfight. Over centuries, the two activities seem to have merged. The religious festival transformed into a more raucous celebration of music, dancing, bullfights, and alcohol, and became so popular that the city of Pamplona officially changed the date to summertime, to better accommodate the crowds. Since 1591, the festival of San Fermin has begun on July 6. Over time, the celebration has stretched from two days to eight, ending on July 14th. Today, the running of the bulls in Pamplona now attracts hundreds of thousands of participants and onlookers from around the world.

Cultural traditions are complicated issues. What may have originated as a noble tradition, emblematic of a country’s heritage, may now, in the 21st century, be seen in a different light. Rodeos, cockfighting, bullfighting – all are blood sports and are now judged with a more critical eye. In Spain, bullfighting has lost its popularity, particularly among the younger generation. A Gallup poll showed that only 8% of Spaniards consider themselves fans of the sport, and active protest groups exist in Spain and around the world. Spain’s own Minister of the Environment, Cristina Narbona, has publicly voiced her extremely negative feelings about bullfighting, and the city of Barcelona has banned bullfighting entirely. However, the popularity of the sport continues in France, Portugal, South America, and in China, over 13 million viewers tune in for televised bullfights every week.

Airfare: Only Iberia Airlines and its affiliates fly to Pamplona, via Madrid. Book early and watch for sales. The following prices are approximate.

If you are already in Spain, you can take the train, the bus, or rent a car to get to Pamplona. Reservations are highly recommended.

Trains: To get to Pamplona, you will probably have to change trains somewhere along the way, and schedules may be inconvenient. Most Spaniards recommend that you take a bus instead.

Buses: You’ll find bus transportation between towns, villages, and cities much more accessible and affordable. Buses in Spain are clean, comfortable, and usually run on time.

Rental cars: Book ahead of time and book online. Prices and selection will be better if you rent in Madrid or Barcelona, where you’ll find most of the major companies. There are European companies, as well, and some specialize in mini-cars – a good idea, considering the price of fuel. Be prepared for heavy traffic in major cities; take valuables with you when you leave your car, and good luck finding a parking space.

You will need a valid passport to enter Spain.

The festival officially starts July 6th at noon, and everything ends at midnight on July 14. July 6, 7, 12 and 13 are the most frenzied and crowded days, when hundreds of thousands of people pour into the city for either the start or end of the festival. July 8, 9, 10 and 11 are less crowded, although the party atmosphere definitely prevails.

Where you stay depends a lot on what kind of a person you are. If you want to be where all the action is and you don’t plan to sleep very much, try to find a room in Pamplona itself. If you’d prefer a little peace and quiet where you can grab a nap or nurse a hangover, look for rooms in surrounding towns like Vitoria (54 miles away) or Estella (30 miles away). There are buses that can get you to Pamplona in time, but be sure to check schedules and be at the stations early.

Hotels: First and foremost, book at least 6 to 12 months ahead of time if you’re hoping to find a hotel room. Some places are booked years in advance. Second, be aware that Pamplona hotels triple their prices during the festival of San Fermin.

Private homes: Many residents of Pamplona turn their homes into mini-hotels during the festival week, renting out beds in shared rooms. Some will serve you a light breakfast.

Camping: Plenty of people bring or rent tents, vans, or RVs and camp once they get to Pamplona. Campgrounds like Errota-El Molino (17 miles away) or Lizarra (28 miles away) have pools, bars, and a wild party scene, particularly on the first and second nights of the festival.

Sleep in the park: Lots of people (mostly young and male) sleep in the parks and plazas for free. If you plan to do this, it’s a good idea to bring a sheet or blanket to wrap up in, and be aware that weather in Pamplona, even in the summer, can get chilly and wet, especially at night. You’ll have plenty of company and there will be lots of noise. Be safe and travel in groups. Stash your valuables inside your clothing when you’re sleeping, and watch for thieves who invade the city during the festival week. There are lockers in town where you can stash your gear.

Established campsites: A couple of tour companies out of London own campgrounds near Pamplona, with accommodations ranging from pre-erected tents to dormitories. Packages include 2 to 3 bull runnings, English breakfasts, a tour of San Sebastian, parties at the campsite, free shuttles to and from Pamplona, and a return bus trip to your departure station.

Since 1924, at least 14 people have been killed and countless others have been gored or seriously injured while running with the bulls at Pamplona. The 3-minute, early morning run winds through a half mile of cobblestone streets that have been fenced off in preparation for the event. Runners must be in place, wearing the traditional costume of white pants and shirt with red belt and bandana, by 7:30 a.m. At 8 a.m., a rocket is fired and six bulls weighing approximately half a ton each, along with six steers, are released from their corrals in Santo Domingo and race through the maze of streets lined with screaming onlookers. They are preceded by about 2,000 runners. Even though the cobbled streets have been treated in recent years to be less slick, they are often damp with dew or rain; runners and animals often lose their footing going around sharp turns, and general frenzy and mayhem ensue. The greatest danger is when a bull becomes separated from the pack and, disoriented and terrified, attacks whoever or whatever is in its path.

July 6: The Chupinazo is the festival’s opening ceremony and takes place the day before the first run. Thousands of people dressed in white and red crowd into the central square. They carry bottles of champagne, red scarves, and various types of food: raw eggs, ketchup, mustard, flour. Shortly before noon, the mayor of the city appears, to welcome everyone to the festival. At this point, the crowd surges, bottles are uncorked, and champagne sprays the crowd. Then a huge and frenzied food fight ensues. At noon, a rocket is fired off signaling the beginning of the fiesta. The crowd cheers and everyone ties their red scarves around their necks. Eventually, the crowd disperses, leaving behind a tremendous mess of broken glass, champagne bottles, and puddles of food.

July 7: This is San Fermin’s Day. The running of the bulls takes place at 8 a.m., and at 10 a.m., a parade celebrating the religious aspect of the holiday meanders through the streets of the old quarter. Participants include the Kilikis, the Zaldikos (horse and rider), and the Cabezudos – all colorful and amazing creatures.

At 5 p.m., there is a bullfight in the city’s bullring, where the bulls that ran that morning meet their bloody fate. At 11 p.m., the partying begins and lasts all night long.
July 8 – July 14: The routine repeats itself, minus the parade. Running of the bulls at 8 a.m., quiet until 5 p.m. when the bullfight occurs, followed by fireworks every night and revelry all night long. This is not a particularly family-oriented festival. Besides for the violence of the run and the bullfight, piles of garbage and broken glass litter the ground, and there are thousands of intoxicated people everywhere. If you wouldn’t bring your kids to Mardis Gras in New Orleans, don’t bring them to Pamplona for this event.

By 3 a.m., a few people are already lining up along the route, to get the best viewing locations. If you plan to run with the bulls, you must be in position by 7:30. If you plan on taking pictures of the run, have your camera ready, because in ten seconds, the bulls will have come and gone.

This, of course, depends on your lifestyle while in Pamplona. If you’re eating in nice restaurants and buying souvenirs, take your credit card. During the festival week, restaurants up their prices just like hotels do. However, if you’re living on Spanish fast food (bocadillos, tapas) and Calimocho, the traditional festival drink of Coca Cola mixed with cheap red wine, you can probably get by on $30 a day, maybe less.