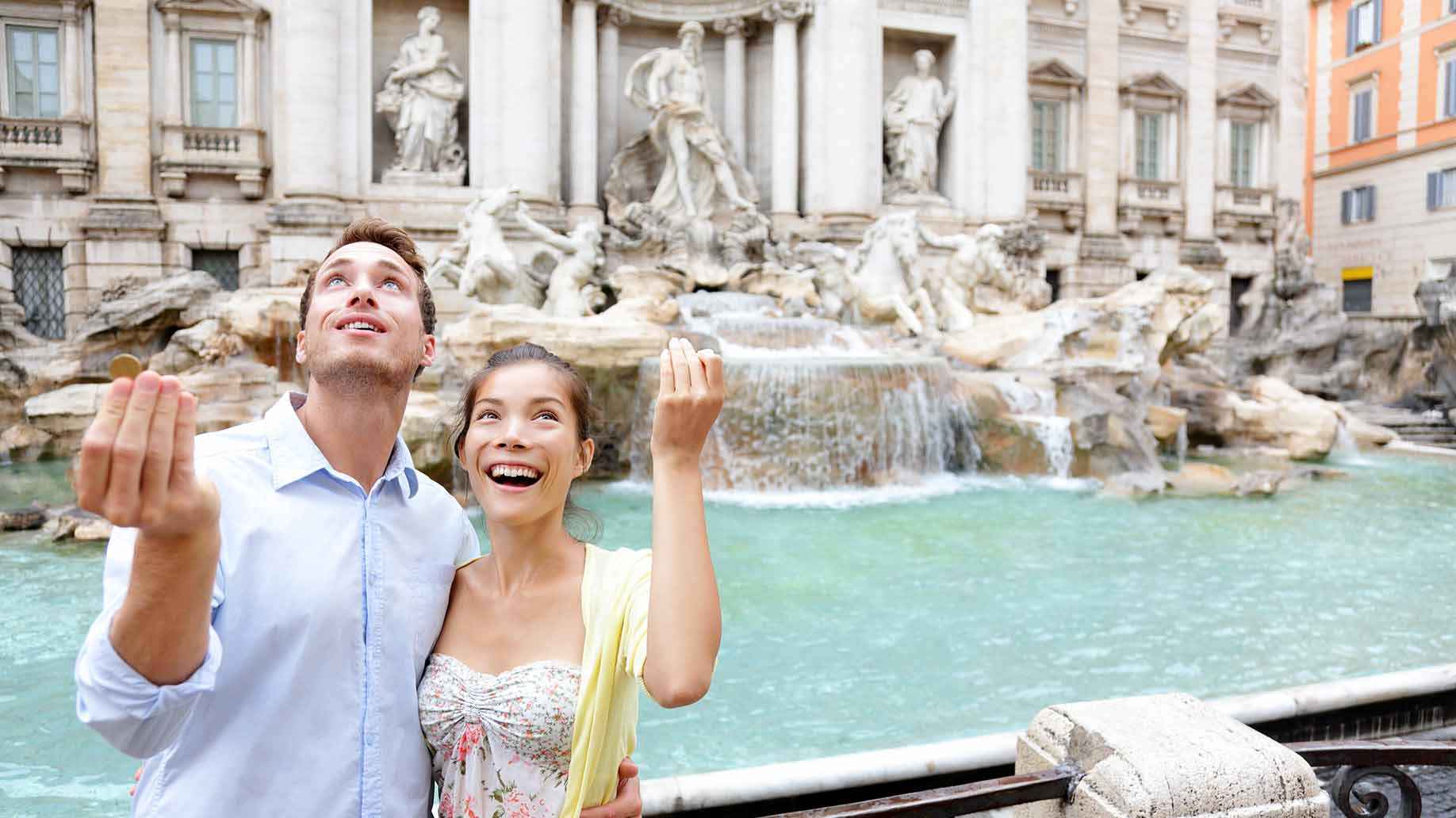 Seeking out the perfect seven day romantic holiday or honeymoon? Look no further than the Western European boot-shaped peninsula better known as Italy. Approximately half way up the boot you’ll find Rome, a cosmopolitan city built upon ancient ruins that still manages to dazzle its tourists with romance, history, architectural splendor and la dolce vita– the sweet life.

According to legend, ancient Rome was founded on April 21, 753 BC by the mythical twin brothers Romulus and Remus who were said to have been abandoned by their parents and left to die on the banks of Tiber. After being raised by a she-wolf, the brothers established their ancient city but then got to arguing over who’d be the head honcho.

Romulus ended the argument when he killed his brother and thus began a centuries long series of back-stabbings and murders on behalf of those whose sole passion was to become Caesar of Rome. From Julius Caesar to Nero to Mussolini, many of these decadent rulers would die a violent death. But they would also leave their individual indelible architectural mark on the great city, much of which is still visible today such as the Roman Coliseum, the Spanish Steps and even the super efficient rail system.

How to Get There From Here

Flight time from New York City to the Leonardo da Vinci (Fiumicino) airport, which is located about 16 miles southwest of Rome, runs about eight hours depending upon the winds. Once on the ground you have several options for getting into the city, be it taxi, rental car, bus or train. While these days the roundtrip transatlantic fare will run anywhere from $625US off-season to $1,280US during peak season, the domestic transportation costs remain affordable even for the tightest budgets.

Plan on spending about 40EUR for a taxi from the airport to your Rome hotel. But an even better deal is the hotel shuttle service which will run somewhere in the ballpark of 17 to 20 EUR per person. A rental car will run about 15EUR per day plus fuel. If you prefer the comfort of the train, figure about 10EUR.

For those who really want to go economy, take the bus. It’s only 5EUR a head.

The Perfect Time to Travel

Pick your pleasure: light crowds or beautiful moderate weather. From Easter to late spring is when the tour busses invade Rome like Biblical locusts. The autumn months are just as busy. But in the summer months, when many native Romans close up shop and take their own beachside holidays to escape the hot-as-Vesuvius weather, the crowds lighten up. Problem is, the mid-day heat is not only physically taxing on the traveler, it causes many of the left-behind shop owners to close up for most of the afternoon siesta hours (2PM-5PM). Also, being summer, some stores and shops close for the entire month of August.

Like the old saying goes, Rome wasn’t built in a day. It’s quite possible you can spend three weeks walking its cobblestones (much less seven days) and still not experience everything this historical metropolis has to offer. But here’s just a few of the absolutely must dos that you can easily fit into a seven day/seven night vacation.

Many people prefer to spend a complete day at the Vatican, which isn’t really Rome at all, but its own United Nations sanctioned country. You’ll tour the Vatican Museums to view priceless masterpieces by Bernini and Caravaggio. You’ll also visit the Sistine Chapel for Michelangelo’s chilling ceiling masterpiece (no cameras allowed) before making pilgrimage to Saint Peter’s Basilica where you’ll discover the Pieta sculpture and an army of stern-faced Swiss Guards protecting it. On Easter Sunday, you’ll find the Pope saying mass for worshippers who gather in the thousands outside the cathedral doors.

Adult tickets for access to the Vatican tour runs about 40EUR per person plus a 13EUR entrance fee. For students the tour will run 35EUR plus an 8EUR entrance fee. Kids 12 and under are free, but the 8EUR entrance fee is still required. There’s a dress code so make sure to inquire about what to wear with your hotel concierge or you can simply check out the Vatican website for more information.

You might want to spend another whole day visiting Rome’s ancient architectural wonders like the Pantheon, the Roman Forum and the Colosseum. Get the most bang for your buck by investing in a comprehensive tour that will take you to each important site during the course of a full day. Tour guides are educated not only about how these ancient architectural wonders were constructed, they’re also knowledgeable about the stories and folklore which have grown up in and around all of ancient Rome.

Figure about 30EUR per person for adults; 25EUR for students and for kids eleven and under, 15EUR. A real bargain you’ll cherish for the rest of your days.

If you’ve already had your fill of ancient history by the time the sun dawns on the third day, you can spend a day shopping at some of the Swiss designers shops located in and around the Via Condotti. You can then take a walk to the Piazza di Spagna where you can enjoy a gelato on the Spanish steps before tossing three coins into the Trevi Fountain. You can of course spend as little or as much as you want for this day.

On the fourth day you might want to embrace your right brain and go Bohemian. Head on over to the Jewish Ghetto where you can breakfast on warm breads and cappuccino before wandering through the area’s many mysterious dark alleys. While there you can browse the secondhand clothing stores and spend some time viewing the artists at work in their studios.

Again, spend as little or as much as your budget will allow, but figure 1.50EUR for breakfast and another 1EUR for the bottle of hydrating water you should be carrying with you at all times. The sausage and fresh cheese you can buy for lunch will cost about 5EUR, and the bottled beer to wash it down, 1EUR. If the inspiration hits and you decide to invest in a piece of original watercolor art, plan on spending 30-100EUR.

How Will You Spend the Rest of Your Days?

The options are wide open. There’s the historical San Clemente Museum and the markets in Campo de’ Fiori. You should have time to take in the Capitoline Museums and the ancient history at the Palazzo Massimo alle Terme. All of these attractions will cost between 25 and 40EUR per person and are well worth the price of admission.

In short, the best way for planning a weeklong visit to Rome is to prepare an itinerary before hand. It’s also a good idea to leave one full afternoon or even a full day free to simply wander around at will, people watching and enjoying the view from several of the many bars and eateries situated throughout the city.

Where to Lay Your Weary Head

While for some people, location means everything, most people during these financially challenged times are concerned with cost. Like many popular European destinations, Rome has a hotel, hostel, inn or B&B to satisfy every traveler’s budget, young, old, or somewhere in between.

Prices for four and five star hotels will run as much as 425EUR per night during the high season. On the other side of the coin, some pensions offer a private room, private bath and continental breakfast for as little as 35-40EUR per night, again depending upon the season. Hostels are even cheaper at 15-25EUR per person. But plan on sharing a room and bathroom.

Looking for something midrange that offers breakfast in the morning and a fully stocked bar in the evening? Look at spending around 190EUR per night.

It’s worth the visit to Rome for the food alone. The city is the home to many amazing award winning restaurants, but it is most known for its abundance of trattorias, which are usually family-run establishments that have been around for decades, if not a century or more. Trattorias are inexpensive and while they don’t offer an extensive menu they can be relied upon for terrific home-cooking, a decent house wine (usually served in pitchers) and great company inside an establishment that serves only a couple of dozen people at once. How much for a good five course meal that begins with an anti-pasta and ends with a fruit desert? Figure about 25-45EUR per person.

If deep pockets permit more formal dining, head to a ristorante which prides itself on a wider range of dishes prepared by schooled chefs. Three, four and five course meals will run anywhere from 45-150EUR per person depending upon the class of ristorante and how much vino you consume.

A third option for the budget traveler is the osteria, which is usually located inside an inn or small hotel. These casual establishments will serve just a few dishes but are very popular with travelers and locals who like to relax and drink wine, sometimes until closing. You might spend 15-35EUR at an osteria.

Lastly, for the super budget travel, Rome is filled with pizzerias that not only serve pizza, but also anti-pasta, pasta dishes, meat and vegetable dishes. Meals here can be had as cheaply as 8-15EUR, but try to avoid the shops located in the heavily populated tourist areas. Seek out of the way places where a native might stop for a bite on his or her way home from work.

While some free-spirited travelers prefer to travel light, sleep wherever their desires take them, buy as much or as little food and wine along the way, many more cash conscious travelers enjoy the security and convenience of the package deal. Often packages to Rome will include roundtrip flight, seven night hotel accommodations, continental breakfast, some tours, hotel taxes and service charges. Souvenirs, lunch, dinner, cocktails and other extras are generally not included. The beauty of these packages is that they can be purchased on short notice or even a year or more in advance. You can go as expensive as $5,000US or more for seven nights and seven days or as little as $900US. The choice is all yours.